Games are an important part of math class, in my opinion. Not only are kids able to practice the skills that we have been focusing on (over and over repeatedly), but they are also doing it in a format that they find fun…and anything that adds fun to learning is a plus in my book!

So, when I plan my math lessons, I am always on the lookout for hands-on fun activities that will add variety and motivation to our math time. For that reason, these dice games are some of my go-to games.

Here they are, listed by category:

1. Build it Big or Build it Small

Kids each need a dice and some scratch paper or a whiteboard. Tell the kids whether they are trying to make a larger or a smaller number. I usually start big but after 5 minutes, switch it to small for variety. Kids make dashes on their paper/whiteboard to indicate the place value of the number.

So, if you’re working on hundreds, kids would make 3 dashes, 4 for thousands, and so on. Kids take turns rolling dice the same number of times as the dashes. Each time a person rolls, he/she must think logically to place the number shown on the dice, on the dashes.

Once kids have placed a number, it can not be moved. The person with the highest (or lowest, depending upon the game’s goal) wins a point.

Variation 1: Make this a decimal place value game by having the kids draw a decimal before the dashes.

Variation 2: My favorite way to play math games with playing cards or with dice is to give each set of partners a “more/less” coin that I make ahead of time. This is a simple plastic or foam circle and I attach a sticker (or you could use sharpie) on one side with the word “more” and the other side with the word “less”. That way at the end of the game, no one knows who has won until you flip the more/less coin.

If more is shown, the higher number wins and if less is shown, the smaller number wins. I like this because it adds suspense to the game and because no one feels the need to poop out/give up before the game is over if it becomes obvious that there is no chance for winning.

2. Roll and Round That Number

For this game, kids need scratch paper or a whiteboard, as well as a set of dice. The number of dice used should match whatever place value you are working on. So if you’re focusing on hundreds, partners need three, or for ten thousands, partners need five.

The first person rolls all three dice at the same time and builds a number with it. The second person does the same and then each person rounds his/her number to the highest place value. For example, a roll of 5, 3, 7 could make the number 753, which would be rounded to 800. Students compare rounded numbers and the highest correctly rounded number wins (or use the more/less coin to decide).

Variation 2: This can also be a decimal rounding game.

Variation 3: For older kids, you could use this with positive/negative numbers. Make a coin like the more/less coin with a positive or negative sign on it to flip and then round and compare numbers.

Kids definitely need scratch paper or whiteboards for this game. Partners should have 3 or more dice, depending upon the type of math sentence template you give them. You’ll need to give kids a specific template that will work, as not all templates will work for this game using the numbers on the dice (see a few examples below).

Have the kids make a template on their paper/whiteboards. Kids roll the dice and place the numbers on the template provided. Kids solve that problem, using the order of operations and then compare their number to see who has the largest (and correctly done) number to determine a winner.

A few possible templates for this game:

Have kids use scratch paper or whiteboards. Partners each roll two dice to make a fraction. The smaller of the roll should go on top/be the numerator. If the person rolls doubles (same number twice, like two fives), that person automatically wins a point for that round. Once dice are rolled, partners work together to see which fraction is larger. The larger fraction wins.

Variation 1: Once dice are rolled, the person who determines the largest fraction correctly the fastest, wins the point.

Variation 2: Use the more/less coin to determine the winner, once fractions are compared.

Variation 3: Add or multiply the fractions and the person who correctly determines the sum/product first wins.

Using scratch paper or whiteboards and three dice, partners each roll the dice to create a fraction. One of the numbers is placed on top (unless it is a one, which means the fraction can’t be simplified) and the other two numbers are left side by side to create the denominator.

Variation 1: Use the more/less coin to determine a winner

Variation 2: Kids who can come up with the most ways to make fractions to simplify would win. This would be a higher-level thinking kind of activity.

For this game, scratch paper or whiteboard will be needed, as well as three dice per partners or small groups. Each person rolls the 3 dice and makes an improper fraction by placing two of the dice side by side as the numerator and the other dice as the denominator, and then simplifies to make a whole number or a mixed number.

Variation 1: Kids use the same numbers to convert into a whole number/mixed number.

Variation 2: Older kids may use 5 dice (3 for numerators and 2 for denominators).

Variation 3: Use the more/less coin to determine a winner.

Here’s a hands-on way for kids to get lots of practice making line plots. For this game, kids need scratch paper or a whiteboard and 2 – 5 dice per small group. Each child makes a template of a line plot before starting the game. Kids need a line and numbers one to six like this:

Once each person has a line plot made, one person rolls the dice. The number shown determines who wins. For example, if a 3 was rolled, the person in the example above has three in the 3 sections.

That would be compared to the partner’s section 3 and the person with more in that particular section wins. If it is the same, the dice is rolled again until a winner is determined.

For this game, students need two dice and a piece of grid paper for partners to share. Each student also needs a marker or a crayon/colored pencil. Partners should have different colors, so if one has red, the other might be blue.

Each person rolls the dice and uses the numbers as the length and width of a rectangle. The person draws the rectangle on the grid paper to scale. So if 4 and 6 were rolled, the person would draw a rectangle that is 4 squares wide by 6 squares long.

In the rectangle, that person writes the perimeter or the area (whichever the teacher indicates at the beginning of the game). The other person takes a turn and the winner is the player who has captured the most area on the grid paper, when time is called.

Variation 1: Use two separate pieces of grid paper. Once students determine area (or perimeter) keep a running total of points. For example, if the area was ten and the second area was 6, the running total would be 16. Highest score at the end wins.

Variation 2: If studying colonization, each player may choose a country and imagine that the grid paper is land in the New World. Spain, England, France, the Netherlands and other countries would work well in this scenario.

Hope this has given you a few ideas for dice games. If you’re looking for more engaging resources, I also have some awesome task cards for 3rd grade, 4th grade, and 5th grades, that are great for centers, one on one or for a whole class game of scoot: 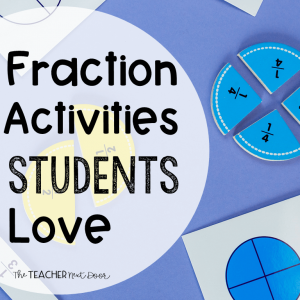 Fractions can be tough! While it takes time and repeated exposure with fractions for students to have a real understanding of them, there are lots

Math games have always been part of our math time. I love the fact that any time I introduce a math game, I know I’ll 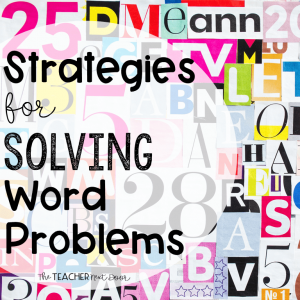 It’s one thing to solve a math equation when all of the numbers are given to you but with word problems, when you start adding Hi, I’m Jenn! I love to create resources that hit standards, are engaging for students, and save teachers time. It’s my goal to help you help your students have fun while learning! Thanks so much for joining me here!
Learn More @theteachernextdoor
Whether you are teaching online, in the classroom,

I am so excited to share an extra-special book wit

I love using these Digital Reading Units to practi