What is Standards-Based Grading? Why is It So Hard? And How to Tackle It! 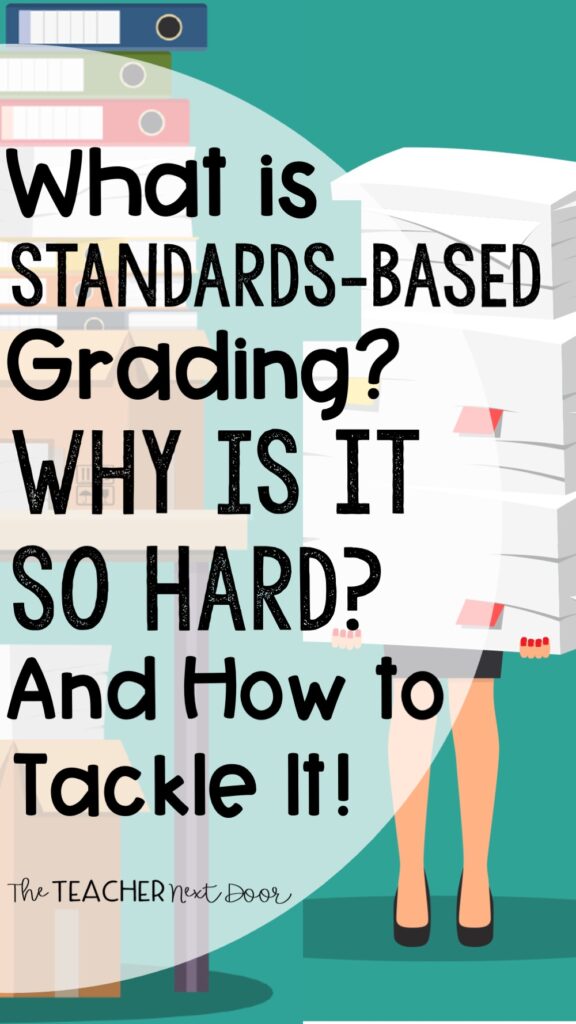 What is Standards-Based Grading, Why is It So Hard, and How to Tackle It!

With so many states adopting new standards about a decade ago, new methods of delivering student progress and feedback were all a buzz.

In came standards-based grading. At first, very few schools jumped on board to give their report cards a total overhaul. After all, parents received traditional letter grades when they were in school, and changing report cards would undoubtedly cause some hiccups.

What is Standards-Based Grading?

Standards-based grading dismantles the traditional report card and turns the report card into a more robust document that represents where students are performing with much more specificity.

For example, a student no longer receives just one letter grade per subject.

Instead, a student may receive several scores under the reading category. This is because teachers assess and grade each individual standard.

Letter grades, which are traditionally based on percentages, take a weighted and averaged measure of ALL student progress throughout the grading period. Thus, the student receives one letter grade per subject.

In addition, traditional grading commonly takes into account schoolwork assignments, homework assignments, quizzes, and tests. All of those grades are added to the grade book, and a culminating grade is spit out. 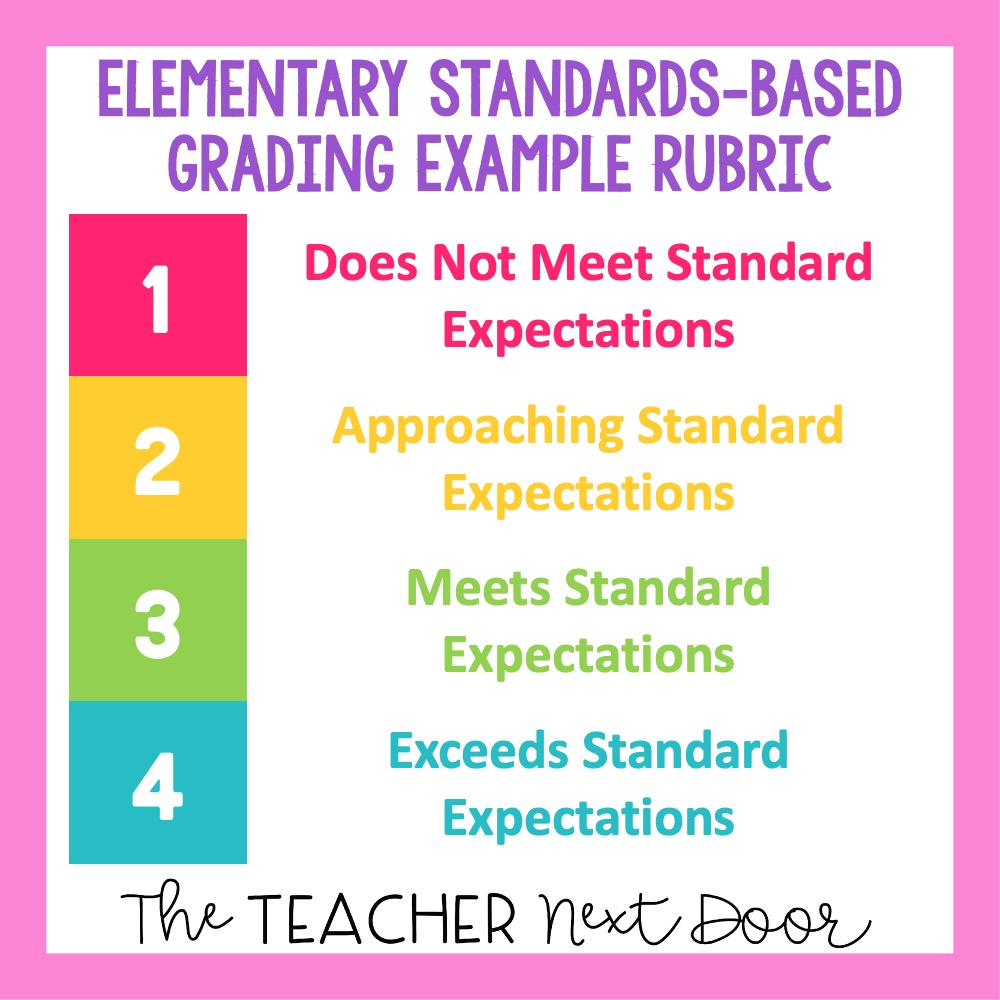 A school will usually use a four-point system to score a student’s proficiency with each individual standard or skill.

Because more states have close to 20 reading standards, it’s unlikely that each standard will be given a grade during each grading period. 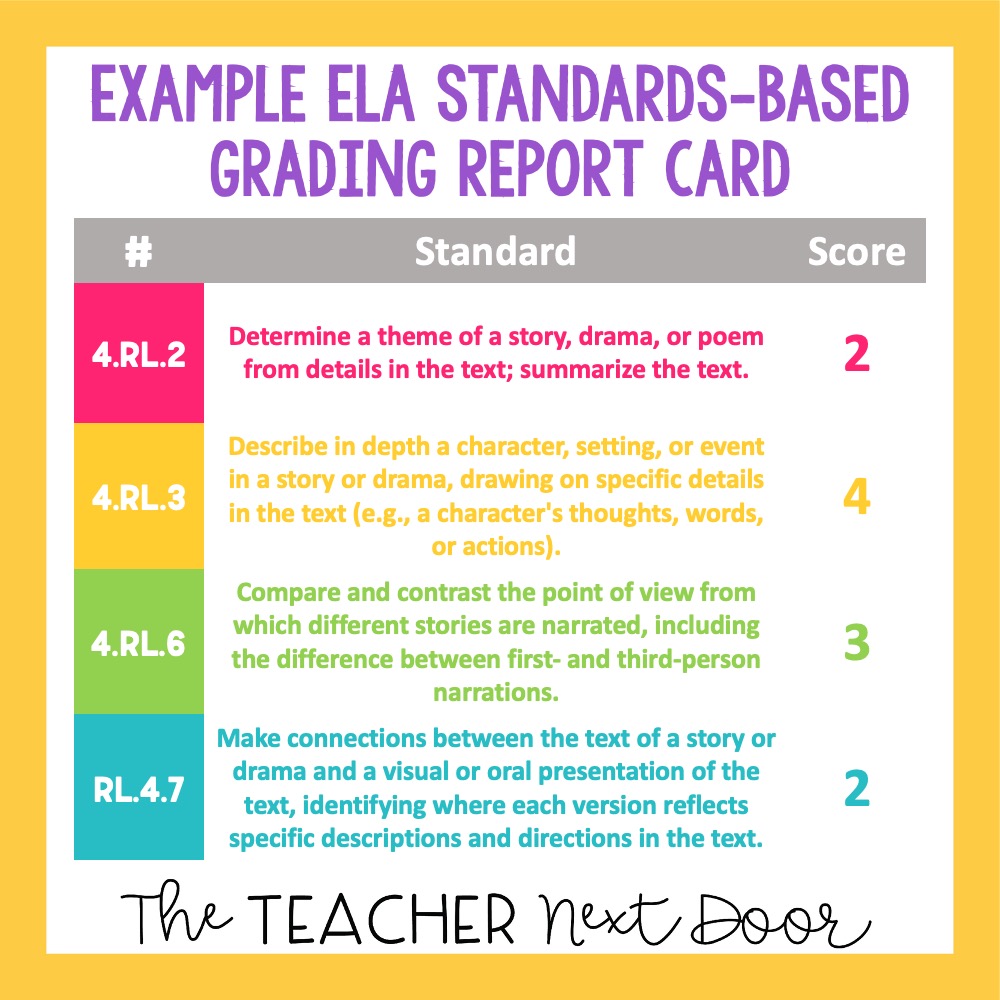 This multi-faceted approach is a key characteristic of standards-based grading and gives stakeholders and parents a broader look at how a student is doing.

Criticism of the Traditional Grading System 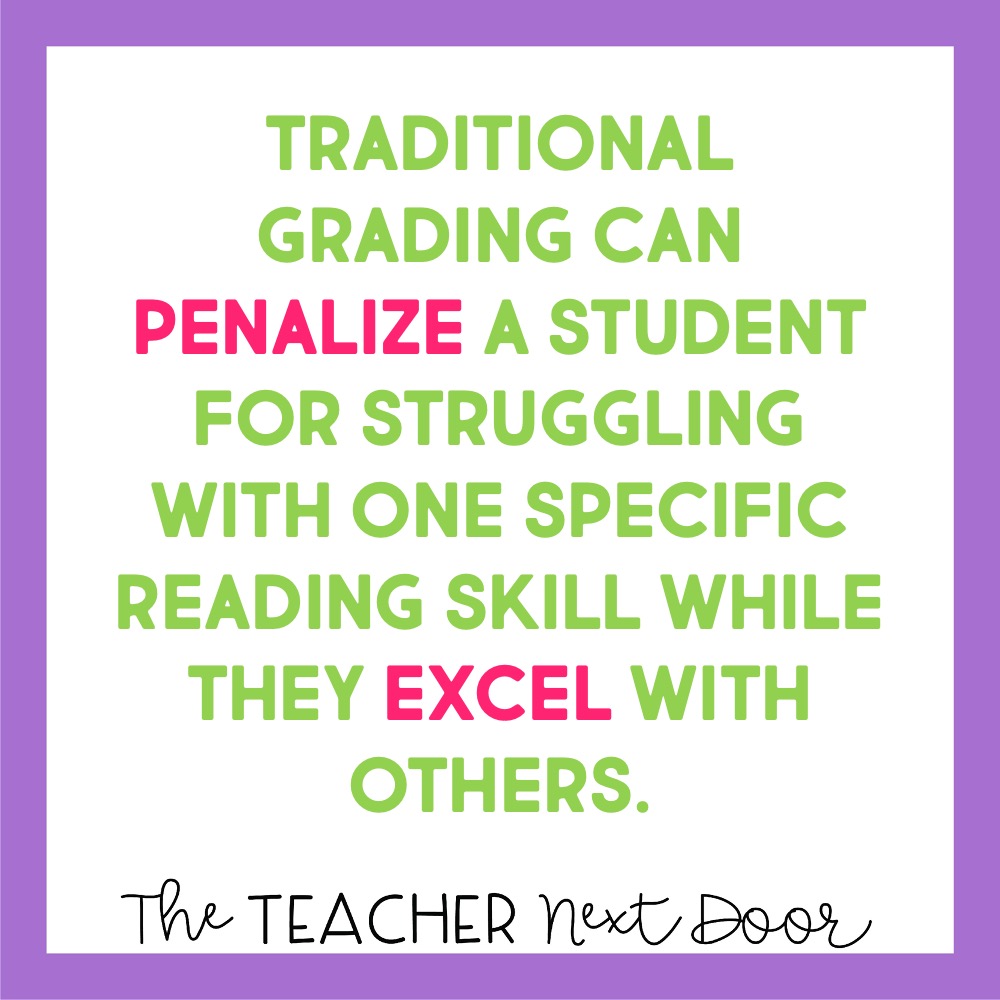 The Challenges of Standards-Based Grading

If your school has adopted standards-based grading, you know all too well the challenges that the first few years can bring. 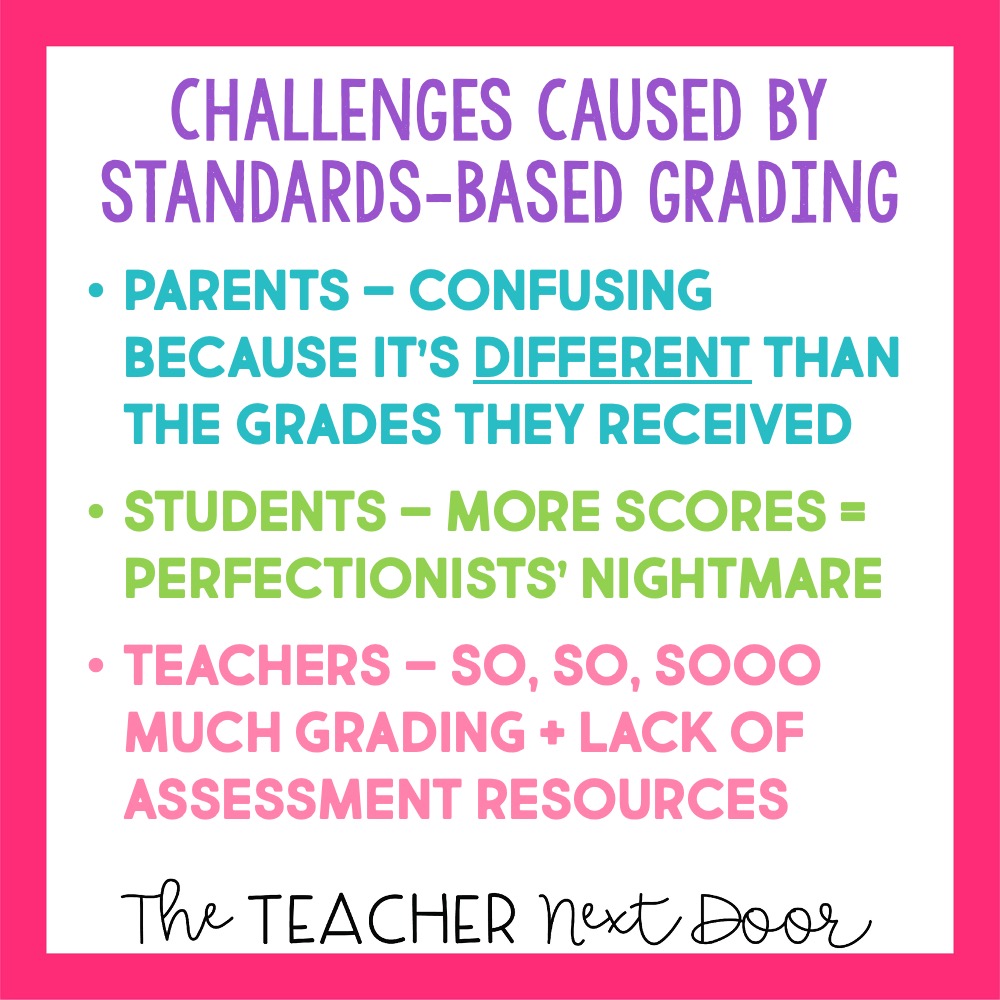 Does that last bullet point resonate with you? You’re not alone!

We surveyed HUNDREDS of teachers on The Teacher Next Door Instagram, and the results were astounding! Take a look! 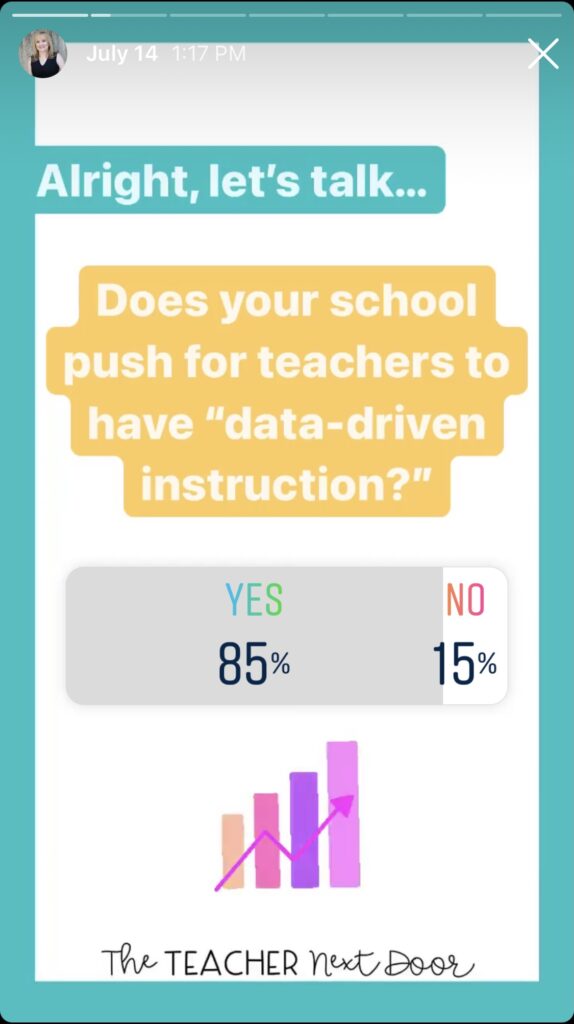 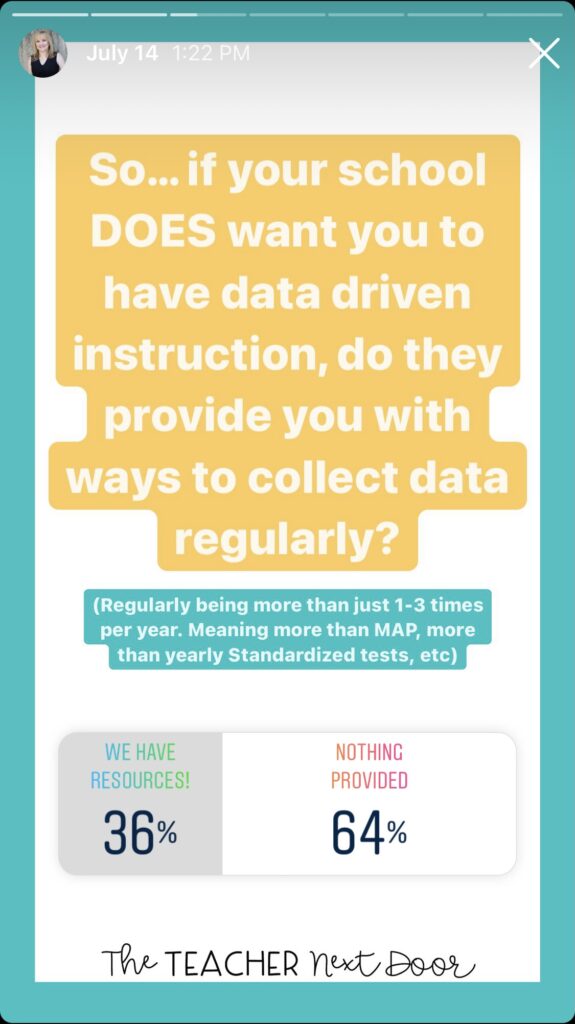 Almost 2/3 of teachers have NOTHING provided to them to help collect student data! Sad, but not surprising. 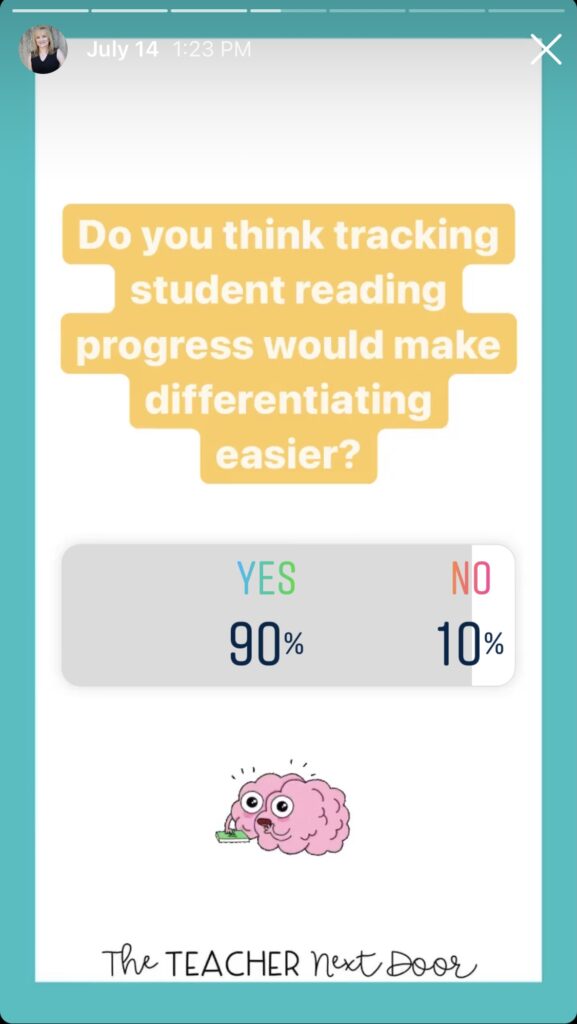 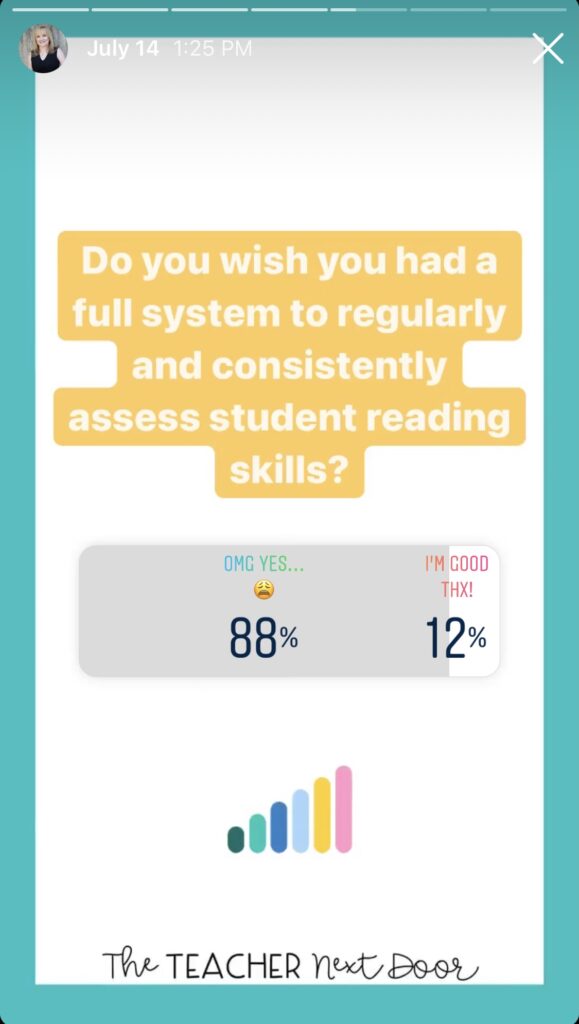 After seeing so many teachers struggling with the challenges of standards-based grading, I knew I wanted to help!

I developed assessments for EVERY ELA standard for grades 3, 4, and 5!

Finally, no more scouring the internet for standards-aligned assessments and certainly no more sitting at the computer for hours creating your own assessments. 🙌

Take a look at your grade level below! Here’s why you NEED these assessments in your teacher-life:

⭐ Still not sure? Try out an assessment for FREE! ⭐ 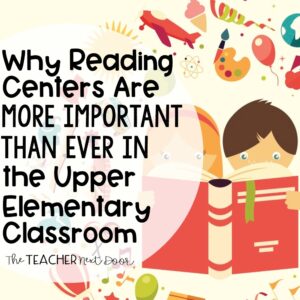 With the ever-changing landscape of the upper elementary in-person (and virtual) classroom over the past few years, reading centers are more important than ever! After 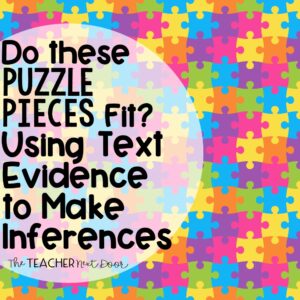 Making inferences is a super important skill for both 4th and 5th graders. Luckily, the process for making an inference is simple. Just take some 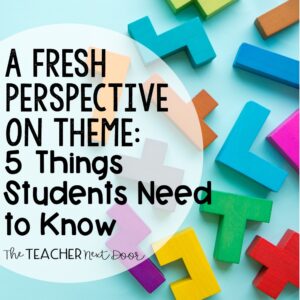 A Fresh Perspective on Theme: 5 Things Students Need to Know

Have you ever repeated a word so many times that it seems to lose all of its meaning? In reading instruction, “theme” can be one

Hi, I’m Jenn! I love to create resources that hit standards, are engaging for students, and save teachers time. It’s my goal to help you help your students have fun while learning! Thanks so much for joining me here!
Learn More @theteachernextdoor
Something about these little building blocks from

Here are✌🏼things that stood out to me about t

🍎 TEACHER QUESTION: How are you handling differ

Found this at @target yesterday. 🎯Thought of yo

Test prep season makes me feel 😩. You too? Al